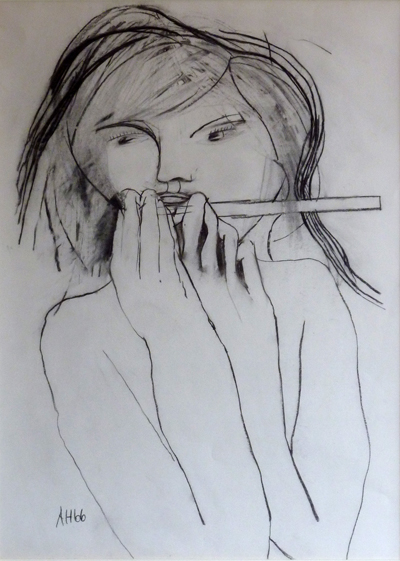 During this period she married fellow arist John Perceval (1923-2000) and became part of his turmultuous life. In 1976 she painted a noted portrait of Perceval. Her work drew attention from the critics. Art commentator Alan McCulloch described her paintings and drawings from this period as ” highly imaginative and strong in observation of character and understanding of distortion”. In 1971 the art critic for The Age, Patrick McCaughey, assessed her show at South Yarra Gallery as a reflection of the influence which German Expressionism was having upon Australian art at that time. McCaughey commended Hall’s treatment of her subjects – for taking animals and familiar domestic surroundings and weaving them into what he described as ” heraldic decorativeness”. McCulloch also comments on the major influence upon Hall’s work by artist John Perceval who, after their initial meeting in 1967, she married in 1972.

Barrett Reid in his 1992 biography, Of Dark and Light:The Art of John Perceval, records that Perceval’s first wife, Mary Boyd, left him to live in England in 1967 as the artists alcoholism worsened. Not only did Hall become Perceval’s wife but, in a previously little credited role, she also became his creative partner. A partnership with a troubled painter, an artist who has been described as the Vincent van Gogh of Australian art. A second Perceval biographer, Traudi Allen, writing in her 1992 work John Perceval, credits Anne Hall for playing a role in the creation of Perceval’s major 1967 painting, Veronica and the Conspirators. The painting was based on Dutch Master Hieronymus Bosch’s acclaimed work Christ Carrying the Cross. Perceval had Hall copy the right corner detail of the Bosch painting, which he then continued his work around. When art historian Margaret Plant described this work in her 1978 study of the artist, entitled John Perceval, she reveals an indication of the intrinsic value of Hall’s contribution.

” The climax of these lyrical holocaust paintings is a strange work, a painting large in scale for Perceval, Veronica and the Conspirators of 1967. The wheat fields, dragonflies and rainbows…feature and Jacob’s ladder climbs up to the sky where the dragonflies are again like helicopters. The paint is urgent, raised up more thickly, more lurid and hectic than in any other Perceval painting”.

The works by Anne Hall on show at Melbourne Fine Art Gallery are testament to her talent as a painter, her position in the Melbourne art world during the 1960’s, and the influence that John Perceval had upon her work. However, the overriding factor in the exhibition is that Anne Hall’s own path as an artist remains clear, reflecting her own strong individuality and personal beliefs.Her highly figurative work, the psychological portraits, meditative nudes, and sharp figure studies, allows us to enter world of a woman with a deep intensity for her subject. These works show Anne hall as a highly talented and dedicated artist who strove to release her innermost feelings.

Please contact the Gallery for more information on prices and availability