This group show at Despard is the culmination of the fourth year of artist residencies on the tiny farm of Roseville at BullBay on the very tip of Bruny Island, Tasmania. This extraordinarily beautiful Island stretches nearly 80 km from Antarctic-facing sea-cliffs at the South to  slightly more settled and farmed landscape in the North and is only 45 min from Hobart. The propelling idea behind Jane Wilson’s vision for starting Bull Bay is to  bring respected landscape artists to live, work and teach to celebrate and enhance Tasmania’s profoundly elemental landscape.

“It’s an unusual spot Bullbay. A little farm, a huge outlook , owning the view out and over Storm bay and Iron pot. An old, old place with the mixed (recent)history from whaling to farming so typical of the island. The residency is small, but we have generated a fantastic stream of artists and their support and enthusiasm for Bruny has been incredible. What do they bring.? A sense of community, of observation , skill and creation. They add to the place and they take away what they need yet they always leave more. This is our second show in 4 years with the support of Despard Gallery, without whom it would not be possible.  Long may we continue.” Jane Wilson 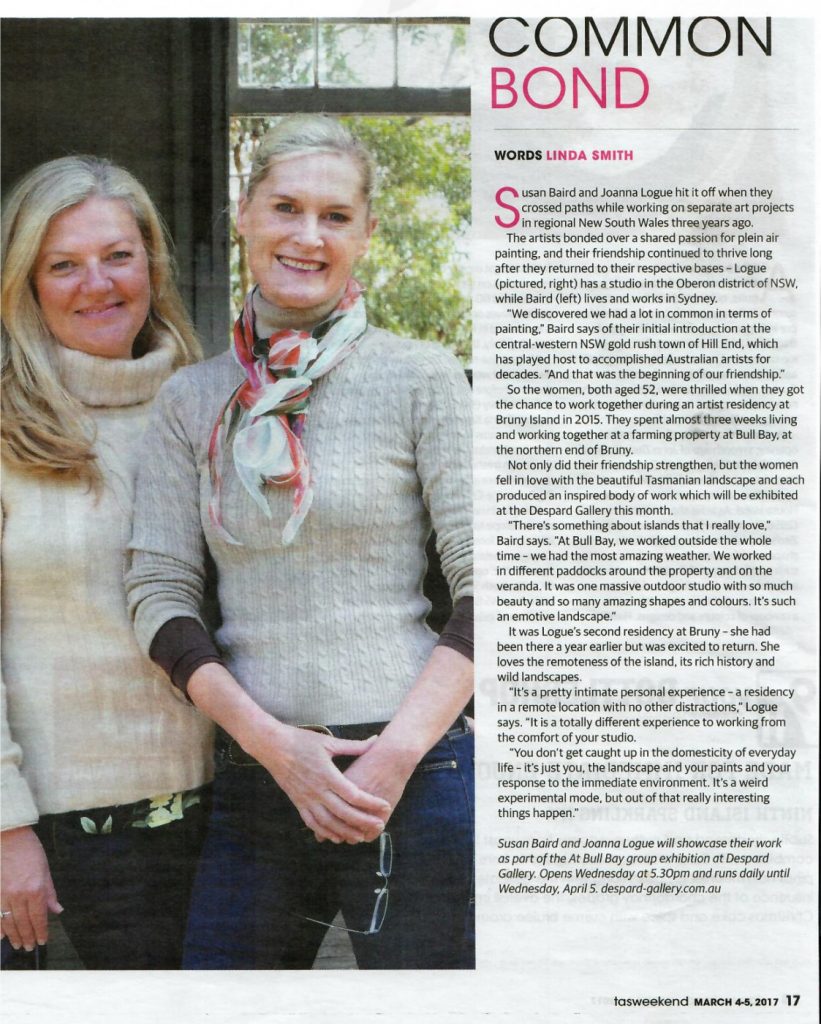 Ian Marr has worked in ink, watercolour, oils and stone inscription since the 1970s. Working on farms in Ireland and Australia has strengthened his sense of intimacy and affection for landscape subjects and these themes and classical references are reflected in his inscriptions in stone.

Joanna Logue was born in Scone NSW. She graduated from the City Art Institute with a B.A in Visual arts and a Graduate diploma in professional art studies. Since then she has exhibited extensively in major cities through out Australia, Hong kong and Singapore having made over 20 solo exhibitions and won or been a finalist in major art prizes including the Fleurieu, NSW Plein Aire, Paddington ,Country Energy..Hn 2013 she participated in an exhibition curated by Andrew Frost at Tamworth Regional Art Gallery called ‘The Feminine Optic – perspectives on landscape’ and was also collected into the Kedumba Drawing prize. Early in 2015 her landscapes were shown in an extensive exhibition called ‘ Country and Western’ opening at the Townsville Regional Gallery and toured the country showcasing prominent Australian Landscape painters. Joanna lives and works in both her country property in Oberon NSW, and Fiztroy Melbourne. She is represented by King Street Gallery on William in NSW and James Makin Gallery in Victoria.

“These painting were made during my second residency at Bull Bay on Bruny Island. Whilst I was there I made observations as aid memoir for future studio practice. These paintings are not indicative of my current visual language. They are relatively representational impressions of particular bays and shorelines which I was drawn to during my stay. I suppose I could say the paintings made there are part of a visual diary that ultimately speaks of the essence of this somewhat remote and mysterious place.”

Susan Baird is an Australian artist living and working in Sydney, NSW. Since 1984 she has exhibited widely in Australia and is known for her paintings of the Australian landscape. As a young artist in the 1980’s, she travelled extensively in Europe and lived and worked in Sardinia, Italy and the United Kingdom. In 1992 she moved to New York City to study at The New York Studio School. Whilst living in the USA she developed a major body of work inspired by the urban landscape, which resulted in two exhibitions in Sydney in ’93 and ’95. These paintings are now in collections in Australia and the USA.

Susan has been selected as a finalist in the Wynne Salon Des Refuses, The Blake Prize, The Calleen Art Prize, The NSW Parliament Plein Air Painting Prize, The Mosman Art Prize and the Paddington Art Prize where she was awarded an honorable mention and won The Peoples Choice Prize in 2011. In 2013 she completed a Master of Art [painting ] from UNSW COFA and has been awarded several residencies that have informed her practice. Susan is primarily an en plein air painter and describes her work as a compilation of many moments of seeing. Susan Baird’s work is held in public, private and corporate collections in Australia and overseas. Susan Baird is represented by Arthouse Gallery in Sydney and Flinders Lane Gallery in Melbourne.

“My process involves working en plein air on a small scale then once I return to the studio it is a process of distilling the landscape from its infinite possibilities”.

“I think it is often difficult for an artist to deliver some clarity about what they do. It is such a mystery how paintings come into being. Matisse gave up on being clear about it at all and just stated that , ‘In art, the truth, the real, begins when one no longer understands anything one does and when there remains in you an energy that is all the stronger for being thwarted, compressed, condensed. And so I give in to time. I wait sometimes many months, as I did after my time on Bruny in Feb 2016, allowing things in my memory to be thwarted and compressed and changed into a form that takes me not only back there but also into less specific territory . I like the final image to hover between my perception of what I have seen and what I call, for want of a better name, The Other Thing.

This suite of small works was teased out of memories of the night. Six dark, velvety Bruny nights that transform the familiar, as all darkness does, into the nether world. I chose a new surface, black plexiglass for its unnatural, fathomless, depth as a foil for the matte, gouache-like polymers that I love. With these I called up the night.

Bruny nights are the blackest. Looking across the channel from Bull Bay only the moonlight gives a hint of something out there. Converting what I had seen from the light of day was like hovering between two worlds, all shape – shifting and illusion.

In the physical making I wait again, for signals from marks and relationships between things to guide me forward. I take an oblique approach to finding a truth in a work. For me, it needs to be ambiguous, containing no form and all forms. It needs to relate to one thing and many things. When a painting hangs in that zone between a perception of reality and ‘that other thing’ I know its time to stop.This can happen suddenly. It can happen hesitantly, but still, it is all a waiting game.”

Lyons lives and works in Sydney where she has had many solo exhibitions with the Olsen Irwin Gallery. She is also represented by The Cat Street Gallery in Hong Kong, Australasian Art Projects in Singapore and Scott Livesey Gallery Melbourne. Highlights include Exhibiting at the Australian High Commission in Singapore and Residencies in Sweden, Bulgaria and Bull Bay. Her work can be found in public and private collections in Australia, Singapore, Hong Kong, Sweden, France, London, New York and more recently with large commission works for Thailand. Lyons studied Fine Arts at Melbourne’s RMIT University and was then awarded her Masters at Sydney’s COFA. She has travelled extensively with her husband and two sons, and adds all these experiences to her rich tapestry of meaning while continuing to explore line and form, life and love.

“I took the drawings from the series titled ‘Midnight Drawing” and ‘Page Turners’ very late at night, with a glass of wine beside me, sitting on the balcony or out in a paddock drawing by the light of the moon only. These are the kinds of beautiful gifts residency time can give you, unexpected moments of time and reflection un-achievable at home with demands of everyday life.  It was a fantastic process, allowing for great freedom of line movement and unconscious mark making.

I didn’t look at the drawings until the next day, laying them out on the studio floor and noticed that many of the consecutive drawings lined up, my eye and hand following the darkened horizon before me (hence the ‘Page turners’).  I did literally hundreds of these strange, loose little works, I’d love to see them all up on a clean gallery wall one day, testament to a special moment in time and place.”

Melanie McCollin-Walker began her artistic journey whilst growing up on the island of Barbados. Always the wanderer, Melanie has lived all around the world and it is this nomadic lifestyle which has been the major source of inspiration for her work. Without the aid of photographs, she relies on her innate sensibilities using a combination of memory, observation and emotion. Subtle layers of paint are juxtaposed with bold and intuitive painterly marks and gestures. The landscape and in particular her signature stormy seas and skies, provide the framework within which the artist’s journey takes place. The resulting paintings are light-filled and dramatic. The essence of natural forces which she is able to capture on the canvas creates a sense of place, simultaneously evoking both mystery and curiosity. Each painting providing a window into her subconscious, while also challenging those viewing her work to delve deeper into their own. McCollin-Walker has been invited to participate in several solo and group exhi- bitions and was shortlisted for the Clifton’s art prize in 2013 and 2016, winning the People’s Choice Award in 2013. Her work is represented in private and public collections globally.

“Growing up in Barbados I always day dreamed about travelling beyond the shores of my island home. It is rare to journey somewhere new and have an immediate connection and a sense of place or belonging…the feeling of coming home as it were. Bruny is such a place for me. There is something transcendent about my time at Bull Bay. It was a unique opportunity for me to ensconce myself in a landscape which I felt innately drawn to. I was fascinated and amazed by the purity of the light and its dynamic impact on the surrounding scape.

The main focus of my time during the residency was to hone my observational skills and to use my work as a way to journal the constant shifts from one moment to the next and in some cases to dissect the anatomy of storms, looking at the way in which they pushed and pulled small patches of light as they danced across the sky.”

For more information on Bull Bay Residency, go to www.bullbay.com.au