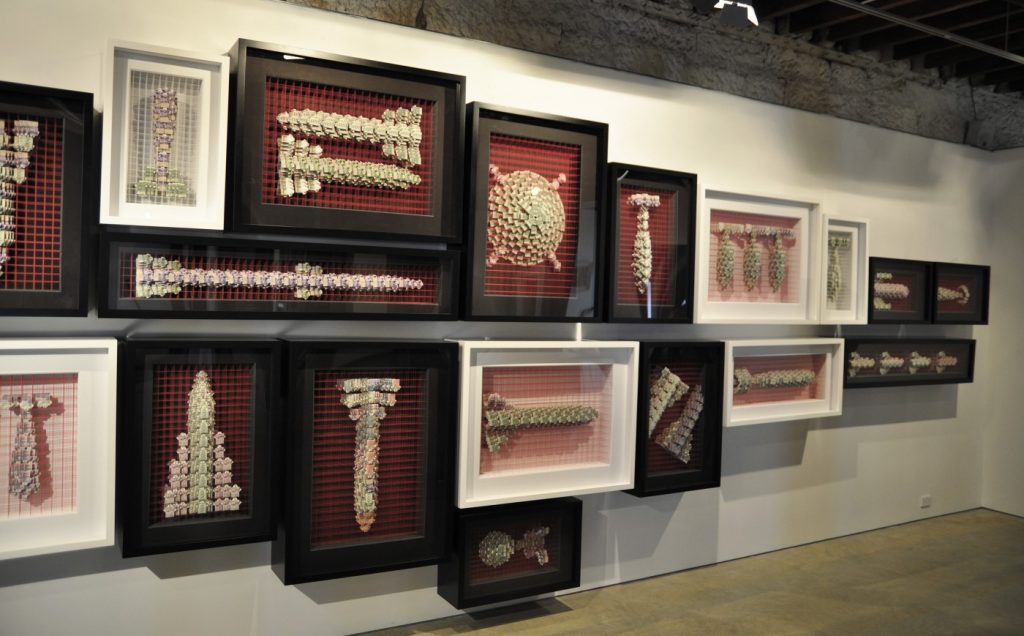 A new solo exhibition with a new body of work by Glen Clarke.

Glen Clarke’s practice is centered on the fundamentals of sculpture; the artist strikes a balance between forms that are created and ones that are cut out. His focus is the concept of the void, and has been an integral inspiration for over a decade, akin to a long irresolvable obsession.

There is an impressive complexity of paper and pattern that constitute the work of Australian artist Glen Clarke. As a heady cocktail of politics, economics and aesthetics are neatly folded into each of the origami styled cannon of his works; in order to create these symmetrical configurations of banknotes and thread. That when pinned together, layer upon layer, note upon note; become the intricate detail for a much larger mosaic styled image. Which from a measured distance prove utterly compelling. And when given to examining Clarke’s works with a forensic eye, they read like the DNA for a coded reality of a greater set of truths. That are as destabilising as they might well appear decorative.

Interested in a lunar landscape of man-made ‘voids’, ‘craters’ and ‘explosions’, that have been fashioned by internal and externals wars historically; Clarke is absorbed by how such critical conditions come to alter space entirely. Domestic, social, political; space is the favoured currency of conflict. In which countries create their own refugees, and a growing state of unease allows for a temporary infrastructure that serves to promote one set of ideas over another. Thus such a history of violence, regional and international, constitutes an archive of misshapen memories that alters the lives of the living. And for Clarke one of the major fallouts of regional wars are the discarded shells that settle uneasily into the earth, and can overtime disappear into the landscape like a mechanised disease set to eradicate larger numbers of humanity. As these UXO’s or ‘unexploded ordnance’ mark a historical period for Clarke in the Indochina region; where Cambodia, Laos and Vietnam are stitched together as countries riddled by unrest and ravaged by war.

Significantly for this new exhibition, Clarke envisages introducing a work born of Project Renew that he has been actively involved with since 2000. Based in Vietnam, Project Renew is dedicated entirely to educating the populous of ‘mine risk awareness’, and of the consequences of the ignorance of living with such explosives for many years thereafter. As new generations seek to cultivate and culture the unsettled landscape for their own purposes, Project Renew alerts them of the danger of coming into direct contact with wreckage from historical conflicts. And for Clarke the collateral creativity of his new works for Despard Gallery are an emotional reflection of his “distain for cluster bombs”, and the media’s “lack of interest in a conflict not determined by an interest in oil”.

Click here for the Art Collector Q&A with Glen Clarke!

“One Less”
“This work takes it’s motivation from my ongoing involvement with ‘Project Renew’ Central Vietnam, MAG Mines Advisory Group Laos PDR and COPE Cooperative Orthotic and Prosthetic Enterprise, Vientiane, Laos PDR. Almost all of my work since 2000 has been inspired by generating as much exposure for these organisations as possible. Voluntary involvement with these not for profit organisations has developed from simple tasks of putting posters in remote Primary Schools educating children of the dangers of collecting scrap metal to video documentation of the demolition of UXO’s (UneXploded Ordnances)
“One Less” is an opportunity for the Art Public to contribute to a process that sees the dismantling and deconstruction of a very large bomb form as a symbol of taking control of the eradication of Cluster Bombs and UXO’s. This deconstruction symbolises the need for awareness and support for remote communities still affected by a war that ended over 40 years ago. To buy one shirt acts as a metaphor for the disarming-dismantling and removal of one UXO”. Glen Clarke, May 2016

The Last Missile Installation – The Wall…..