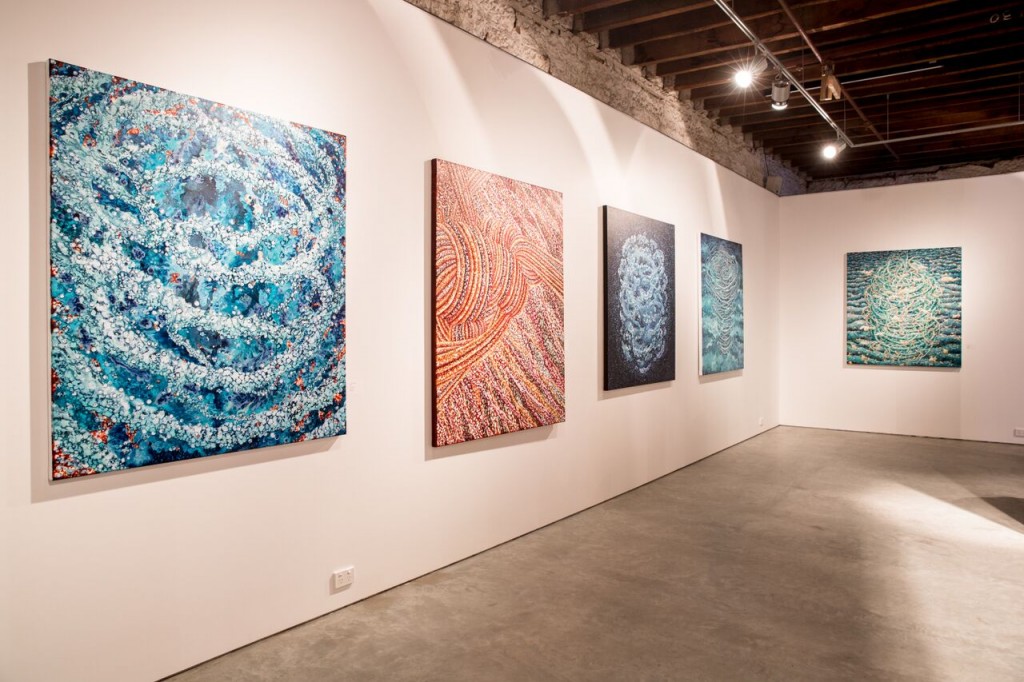 The Ocean at the Edge of the Beach

Anne Morrison is, in many ways, a typical Australian, in that she was born elsewhere and, over decades, has synthesised at least two cultures into what she has become. Her back story is important in realising why she is, in my opinion, one of Australia’s most exciting painters, both emotionally and intellectually. And some of that story is inevitably tied to the long history of vigorous and expressionistic Scottish painting – especially the use of colour. Australia has given her a sense of vast landscapes and the mix of the macrocosmic star-fields and the microcosmic beach detritus that she transforms through a slow multi-layering of fluid paint. It has given her a love of the art and cultures of the first nations of Aboriginal peoples. And it has given her a necessary distance from her first home that still helps to define her work – as it has done for artists as varied as Peter Booth, Guan Wei, or Ian Fairweather.

If there is one constant obsession that runs through Scottish painting – from Samuel Peploe and JD Fergusson (known as the Scottish Colourists) to the widely travelled mystic Alan Davie, and the biennale-hopping Jim Lambie with his psychedelic floor tapes – it is the love of colour and its transformative qualities. If you are deprived of colour in your everyday life, as Northern Europeans so often are, it is easier to get addicted to than crystal meth or boxed sets of Game of Thrones. Anne Morrison obviously has that addiction, as the colour-saturated canvases in this wonderful exhibition bear witness.

She also has international experience that still feeds into her studio research. She trained as a painter at Glasgow School of Art in the wake of a host of young, mostly male, Neo-Expressionists. She followed this with a postgraduate degree at the prestigious Royal College of Art in London (alongside nominated Turner Prize artists Tracey Emin and the Chapman Brothers), alma mater to a host of graduates from David Hockney to Therese Oulton and Chris Ofili.

Anne Morrison now lives near a beach on the North West Coast of Tasmania. She loves this island state, as I do, and after being artist-in-residence at the Centre for the Arts in Hobart, and an outstanding PhD candidate, she has called Tasmania home for many years. The beach she lives beside is, of course, connected to a series of oceans that wash around our entire planet, gifting her all the subject matter she needs to craft her richly-coloured canvases.

These are highly complex images that hit your retina with all the power of a waterspout; exhilarating and refreshing. She described, quite beautifully, the treasure trove of detritus that washes ashore on the doorstep of her house and studio in the biographical section to the 2015 Glover Prize, “I find a tangle of information, where worlds collide, as plastic, metal, organic, and synthetic forms are woven together. I imagine the coiling ribbons of DNA, colonies of spores, patterns within a human cell and micro-chip… A residual architecture of form, structure, and patterns shape-shifting like a labyrinth before our eyes.”

So everything is connected, through blue oceans, and memories, through brush strokes and walks along the shoreline. And through painting, the past and the future give the illusion of being locked in an eternal present.

Small Worlds is the forth solo exhibition Anne  has produced for Despard Gallery, curated by Director Steven Joyce.