Matthew Harding’s unique sculptures and significant public art works are an ongoing visual legacy to his energy and creative spirit.

Over the years Matthew and I had l random but long conversations via phone and when he came to Hobart our time was spent working and philosophising in the gallery, putting the show up until late in the night, playing with, positioning and lighting, sustained by a couple of reds and take away pizza.

When I planned the opening of the new Despard Gallery for late 2015, I wanted Matthew to be part of the inaugural exhibition for late November.

A few months before the show, my partner and I went to Trentham and met Matt at the workshop, the scale and complexity of the steel sculptures he was working on were extraordinary. Matthew had an inbuilt CAD program in his brain, evident as some of the curves and stress points on the sculptures needed a mathematical/engineer’s logic to resolve.

Running a few hours late, Matthew arrived in Hobart with his truck packed with the entire exhibition of monumental steel sculptures.

Matthew designed, fabricated and delivered the entire show in just six weeks, the works ranging from a mere 25cm to a grand 3 and a half metres!

We carried up the stairs the 3.5 meters steel structure in three large canoe shape pieces. When installing the work, Matthew realised the ceiling was a bit lower than he had planned for. With some tight manoeuvring and quick thinking, we managed to squeeze the work into place.

Our deepest sympathy goes out to Freya and their four children.

Steven Joyce and all from Despard Gallery

Matthew with Peter Hill inside of She’s Not There, November 2015 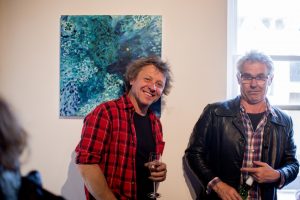 Matthew and Patrick Hall at the new Despard Opening, November 2015