Half Fool, Half Entity 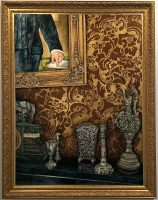 Half Fool, Half Entity

“This show represents 30 years of high adventure with Despard Gallery. While my obsession with beautiful objects, which don’t actually exist, continues, the work is thematically broader because it contains some alternative tangents that I have been playing with over the last couple of years. These, together with a selection from my back catalogue, should ensure something akin to a Hollywood blockbuster. Specifically, something like, ‘The Good, The Bad & The Ugly’.

Unlike previous shows, which have had an absolute focus of intension, this show is more about the ‘squirrel’ drift that signifies the very foundation of my thinking. While I still believed in creating beautifully absurd ‘objects of ostentation’, I became increasingly obsessed with the ‘Madonna & Child’ motif and the desire to explore potential visions of the offspring from unholy alliances. I decided the new generation would be egg-like, but always mirror the mother.

Then, towards the completion of ‘Jarhead’ and child, I was distracted by antique utensils and decided to produce a suite of paintings under the title of ‘Cutlery’s Last Stand’. Around the same time, I had an epiphany at Clarendon House with John Glover’s ‘Swilker Oak’ painting, leading me to consider a series based on the interiors of heritage homesteads. The Clarendon, Woolmers and Entally works are the obvious consequence of this adventure.

The jugs re-kindle my passion for crystal, indelibly stamped on my soul from my chandelier days. As vessels, they also reflect my yearning for greater transparency, an issue that is increasingly avoided within contemporary life. As to the rabbits? Well, it’s Albrecht Durer’s fault. His ‘Young Hare’ (1502) has formed the basis of my teaching every year by challenging my students to re-invent the creature in their own visual language. This is the public debut of my versions.” – Wayne Brookes