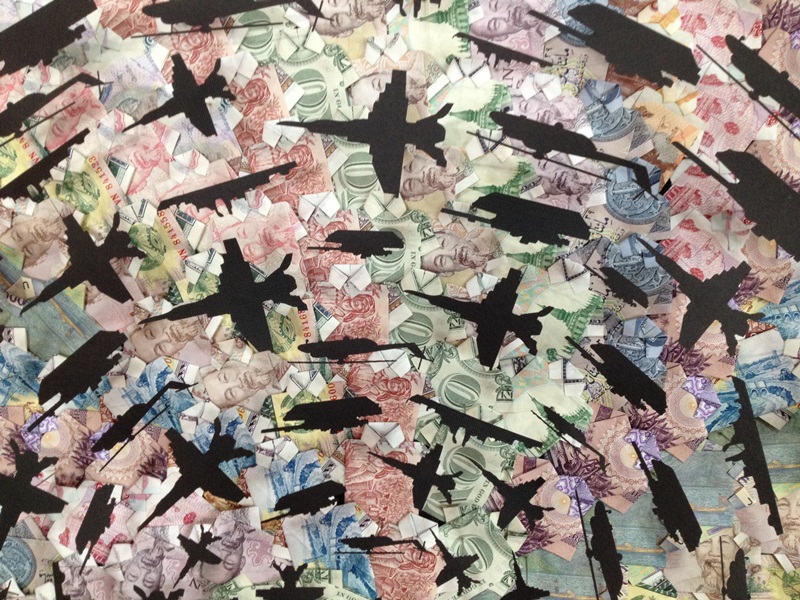 Clarke’s collages and paintings are intricately constructed from delicately folded currency and precisely cutout images of wars machinery and military hardware. Each component is then assembled into a tapestry of the symbolism behind war from the artists perspective – each folded note, cut out plane, tanker, helicopter and ship tells a story of the profits and losses attributed to war. Clarke’s fascination with stealth technology and camouflage-cloaking-invisibility, via examinations of the light bending properties of Mother of Pearl and Cuttlefish, is evident in this new body of work.

Glen Clarke’s practice is centered on the fundamentals of sculpture; the artist strikes a balance between forms that are created and ones that are cut out. His focus is the concept of the void, and has been an integral inspiration for over a decade, akin to a long irresolvable obsession. CLOAK continues this train of thought within a series of works that fo­cuses intently upon these recurring tensions.

Since 2003 Glen Clarke has been involved with the non-profit organisation PROJECT RENEW in Quang Tri Province central Vietnam and MAG, Mines Advisory Group Laos. Their primary objectives are Mine Risk Education (MRE) and to clear Quang Tri & Quang Bình Province and the neighboring Ho Chi Minh Trail on the Laos-Viet boarder of Unexploded ordinances.