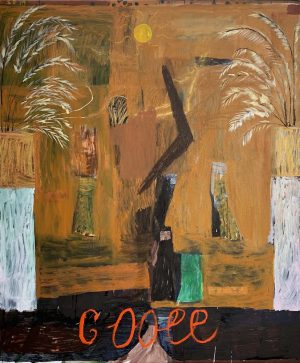 This painting references the line of Menin, which was a sculptural sentry which stood at the gates of the fortified town of Menin Belgium. The lions hold special significance as for many men they were the last relic of civilisation they saw before departing for the western front.  The boomerang and cooee reference the cooee postcards sent by many Australians to solders beckoning them to return home safely. 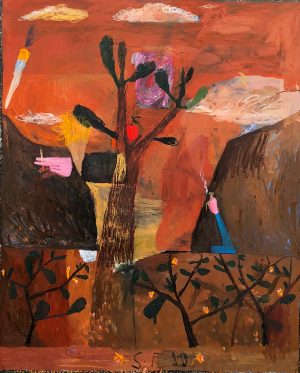 Pear Tree Canyon is a vanitas painting of sorts, an ode to Phillip Guston’s bleak post-war nihilism and self-deprecation. The painting depicts a chaotic scene full of invasive species, smoking hands, and an ominous sky. It represents the inevitability of human fallibility. 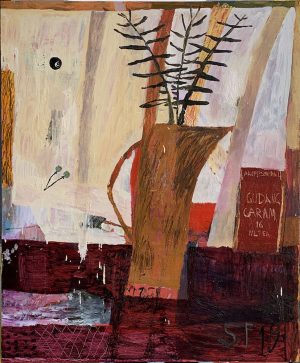 Salt Warehouse is the English translation of Gudang Garam. This still life painting references the Bali Nine, a story which forms part of the Australian meta-narrative. 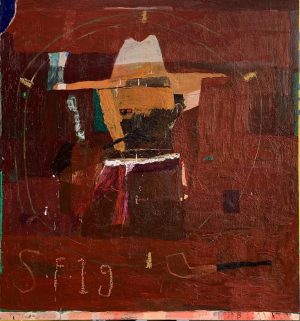 Wembley Ware was a company that created kitsch Australian ceramics from the late 40s to the early 60s. Their speciality was ashtrays and objects of Australian fauna. The closure of the Wembley Ware plant pre-dated the 1967 referendum to de-classify indigenous Australians as fauna.

Turkish Delight depicts a snake in a wicker basket with two date palms on the horizon. It was painted with reference to the overland expedition to put a telegraph line in from Adelaide to Darwin, supplied by Afghani cameleers who were deported once the work was complete. 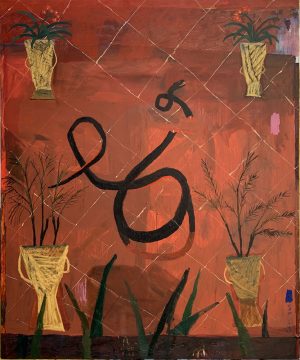 This painting explores the death of patriarchy within Australia.