Acknowledged as Australia’s longest running art fair, the Melbourne Art Fair (MAF) has built a reputation around stimulating significant critical and commercial success for contemporary artists and galleries nationally. Carefully curated down to only 50 of the most respected galleries, MAF is regarded as a key innovative platform to view iconic works of art by Australia’s leading contemporary practitioners.  Despard Gallery is excited to be participating in MAF 2022, presenting a solo exhibition by renowned contemporary Tasmanian artist Patrick Hall.

Making up this remarkable presentation, Hall will be exhibiting his signature wall and floor-based sculptures alongside new framed works on paper, all rich in storytelling that capture a sense of curiosity and wonder.  Hall has created a new series of works on paper specifically for
exhibition at the Melbourne Art Fair, called The Wailing Ships. Narratives that underpin this new series, include reflections on the ongoing plight of refugees, contrasted against a global addiction to consumerism and quickly forgotten atrocities of war.

Click here to register your interest for Patrick Hall at Melbourne Art Fair. 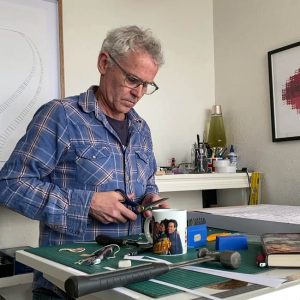 Patrick Hall is an established contemporary artist based in Hobart, Tasmania and has been represented by Despard Gallery for nearly thirty years, exhibiting his work in solo and group shows in Hobart, Melbourne, Sydney, Chicago and New York.  With a practice spanning four decades, Hall has established an international reputation for his intricate and thought-provoking sculptural works.Hall graduated from the Centre for the Arts, University of Tasmania in 1986. Major exhibitions include a survey at the Tasmanian Museum and Art Gallery in 2015 and installations for Dark Mofo in 2016 and 2019.  International exhibitions include La Maison Rouge, Paris, as well as participation at SOFA (Sculpture, Objects, Functional Art) in Chicago and New York.  Hall was the first non-American to be featured on the front cover of the official catalogue for SOFA Chicago in 2001.  Local commissions include sculptures for the Elizabeth Street Mall, the Beaumaris Zoo site, the Royal Hobart Hospital the Museum of Old and New Art (MONA). Hall’s work is held in major collections, including the Tasmanian Museum and Art Gallery, the Museum of Old and New Art [MONA], the Power House Museum, Sydney and the National Gallery of Australia, Canberra.

Move The Stars To Pity

‘Packed in rows all coiled like rope. Driven to the edge by the point of the gunnels. Lost between the rails below the plimsol lines. In hope they wait and wait to enter that exclusive club where things are supposed to be free. When the neon lights are flashing “no vacancies”. When the only dance in town is the limbo. When their distress code “look I’m here” vests are all bloated with the buoyancy of dreams. When all the jackets are orange and all the suitcases are overboard. When there are no places to go. When feathers sink and anchors float. When all that’s left is a broken oar to steer the boat. When all the time you want to move the stars to pity.’

‘The local colour leached and faded. The cargo – the stripped plumage of paradise  stowed in the day glow boxes of plunder. Stacked like castles built of hearts desires, treasure chests, ribs and steel barcodes. Forbidden fruit. Crates of apples, those tiny screws and endless circuits more numerous than all the leaves on all the trees. Made in the no place of every place from the sweat and toil and hands of those with no name. The material world adrift on the shifting currencies of the latest thing and the must have. To have in holds. Marriages of convenience and fleeting passion. All to fuel the fires. To feed the withering glare of shop fronts. Bright and raw. All screaming from the branding.’

With You In My Hands

‘Alone in this company of men I scratch your name in the ice white bone of watery beasts. The memory of you soot-blacked in the empty expanses. With you in my hands I float in the belly of a nutshell on the surface of a dark deep – of monstrous eye and razor tooth. With you in my hands I am more than grist for this machine of splinters, of groaning and shivering timbers. Above, the press-ganged winds howl their desolate chorus, trapped in the web of moaning geometry that divides and slices the sky – lashing the clouds to service. But with you in my hands I exist in a world away from these wailing ships.’

‘To a song of pipe and drum and the clashing sound of iron clad jingoism, we, all strong of armour, with a head full of steam, all gun barrel straight ahead gathered around the vivid colours of our impossible standard. Was the price we paid too much? A screwed up history of missing pages. Of blankness and empty spaces. The us and them a sum of lost years. I, bent and wrinkled, with frayed ribbon and heavy medal mourn the upright and forever young and hear the gentle sigh of a spilt wind from a torn flag waving.’

‘Looking beyond the railing the horizon seemed to glow. A thread pulled taut by the arc of the planet. Made white hot by the compression of sea and sky. A string boundary between the peeling labels and lost luggage of old worlds and the shining future of promised lands. To be here on a knife’s edge lashed to the raft by lines tethered to anchor and life buoy. At this intersection the criss cross weave of history is caught in the net of now. Aboard a ship of hope adrift on a cruel see.’\

Made Of Broken Pieces 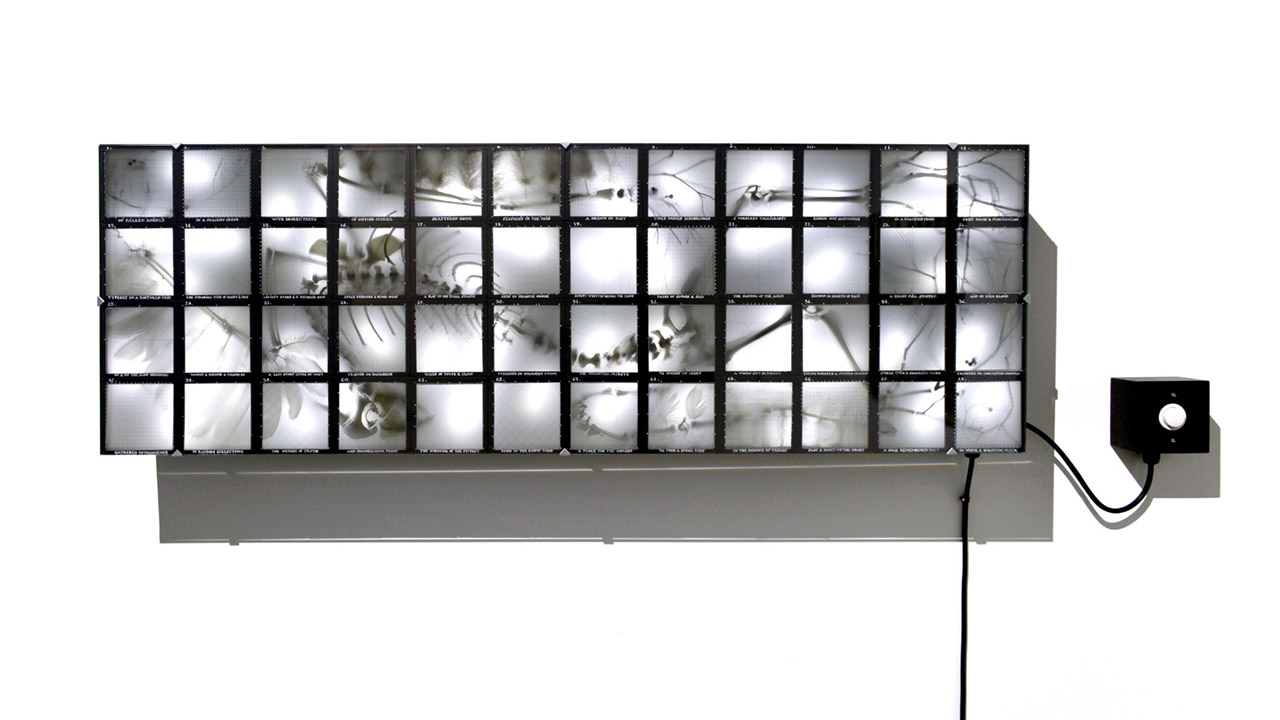 Of Fallen Angels takes its inspiration from the famous 1861 fossil in the National History Museum, London, Archaeopteryxes (a name derived from the Greek word meaning “feather”). Discovered just two years after Charles Darwin had published On the Origin of Species it was evidence of a link in a chain that joined dinosaurs with modern birds. That modest piece of quarried limestone fell and rippled into a tumultuous pool of ideas, of competing scientific debate and the challenging of religious orthodoxy. It was part of a proof that Life, in its wondrous variety, is a result of tiny, random chances and changes. Life is a continuum with past, present and future inextricably connected.

The artwork is reminiscent of a collection of magic lantern slides arranged in a grid which echoes the human desire for order and systematic thought. Projected shadows of bones shift and slide across its surface.These bones form a fossil-like skeleton that is part mythic creature, part avian, part simian, part landscape. Of Fallen Angels wants to suggest that belief and knowledge, like Life itself, are subject to the ever shifting processes of time, history and human circumstance. Like fossil and commandment even things “set in stone” will change, will come in and out of focus, will move between the dark and the light and become folded into the geological mixing bowl of deep time. This makes our blink-of-the-eye tenure so precious, so important. 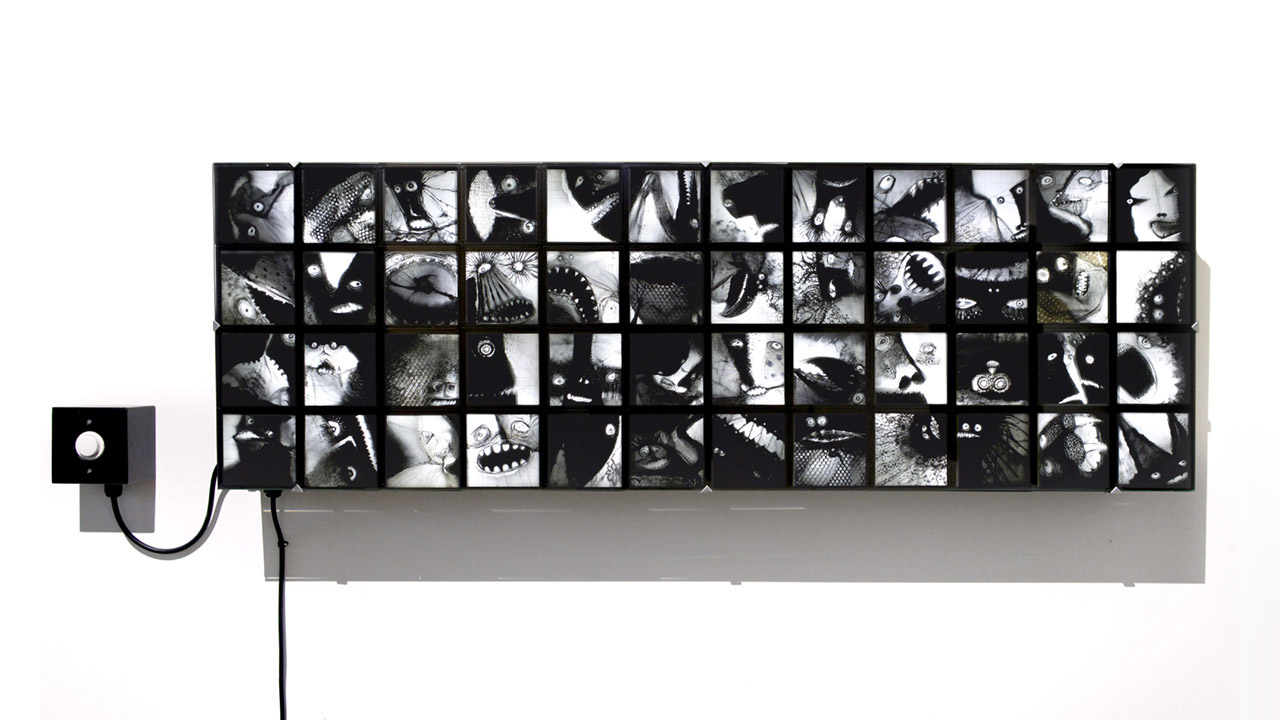 If They Should Accidentally Fall

If They Should Accidentally Fall is a multi-piece sculptural installation originally created for Dark Mofo in 2019, presented at Narryna Heritage Museum and then again at Sydney Contemporary. The series of seventeen individual works explore the passing of time and the slow erosion of belief, created using LED lighting and audio recordings, which were installed in a darkened and intimate space. Rows of spirit bottles sit on high shelves, printed with human faces and are illuminated from the inside. Each light is sequenced to fade on and off, mimicking the inhalation and exhalation of breath. From the underside of each shelf, in line with the eight bottles, hang small speakers that whisper tiny stories of secret longings and disappointments, making up the ‘congregation’.

Interspersed between these rows of heads, are the ‘preachers’. These figures, maybe spirits, saints or genies, also have a bottle head, but a body that spills from the unstoppered container. Each preacher is enclosed behind glass, suggesting a state of incorruption, such as a religious relic or icon. Etched into the glass of each figure is a passage of text, written in heightened prose to suggest a devotional hymn or parable. If They Should Accidentally Fall creates a secular and sacred space of intimate confession, where fragile vessels spill secrets, longings and desires. It is a place where confessions are made and shared, where voices seep and search for solace, a place where we can bear witness to our own human frailty.

This project was assisted through Arts Tasmania by the Minister for the Arts.

Presented as part of Despard Gallery’s Artist Interview Series, listen to Patrick Hall discuss the concepts that underpin his practice and how drawing from personal narratives has helped his work tackle significant and universal topics.  Patrick also reflects on how a craft based approach, by working slowly and methodically with materials, can help unlock their stories and inherent characteristics. 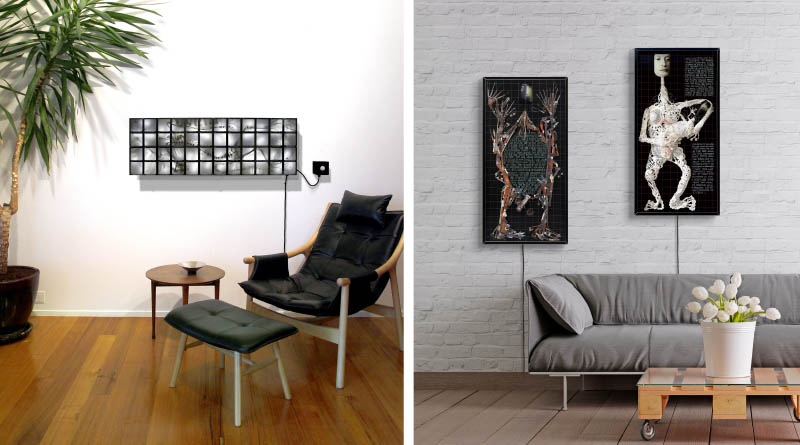